Psychopathy: Is It In Their Eyes? 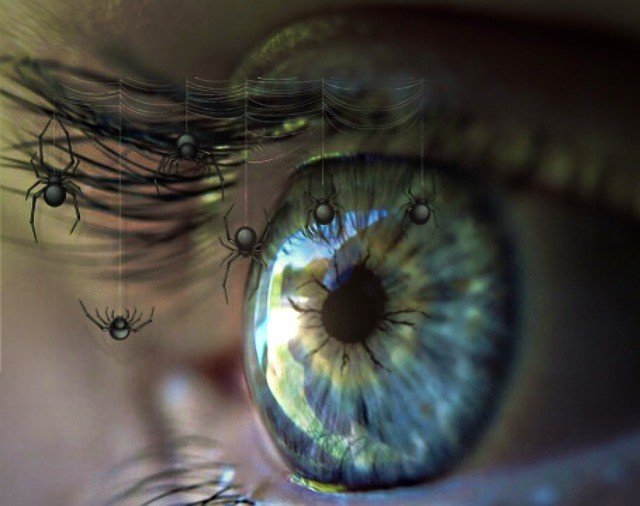 “It’s their eyes that are the most remarkable feature. How they drill into you.”

Do a psychopath’s eyes give them away? Are they a reliable sign we can use to identify and avoid them?

The answer might just be “yes.” But nothing is foolproof, of course. If you don’t see the signs in someone’s eyes, it doesn’t mean they’re not psychopathic.

Many of us have seen firsthand or read descriptions of psychopaths having an intense gaze, a predatory or reptilian stare, or eyes that are lifeless, dead, emotionless, cold, icy, flat, black, or empty.

I’ve gotten many comments from readers who describe the phenomenon:

I have noticed that sometimes his eyes looked completely without expression, like glass…

I couldn’t even look him in his eyes because I felt a shiver running through me. I thought it was because I was in love.

My nickname for him was Devil Eyes…

As the relationship progressed I saw his eyes change to evil, soulless tools and it was frightening and perplexing.

I saw that serpent look in the eyes…

I saw a picture of me and him the first day we hung out. It was like staring at the eyes of the devil…

Once you look into those cold, dead eyes, you aren’t the same..

I have one very eerie photo taken on a holiday where he is looking directly at me through the lens. His eyes appear to be flashing with hatred and contempt.

My two year anniversary is Sunday and I looked at our wedding pictures, just to see if his eyes were as dead then as they are now. I was horrified. They were.

“Pod Person,” that’s what I call him. The lifelessness, lack of light or soul behind his eyes is chilling. His eyeballs appear as if they are made of stones.

I have not a doubt that I was hypnotized by him and I believe I know when. And it was when he told me to “look into my eyes” which I did and his response was, “I love when you look into my eyes.” By the next day, I woke up and thought about him immediately and couldn’t stop…

My psychopath had a lined face but the eyes were bright and he tended to act as if he was in his twenties (going on 60 in physical terms!). It can be a very sexy combination.

Sometimes during sex, mine would stare directly into my eyes for up to twenty minutes at a time. His eyes would not waver…

I remember thinking how his eyes were like that of a lizard, alive but somehow dead, at odds with the rest of his face. 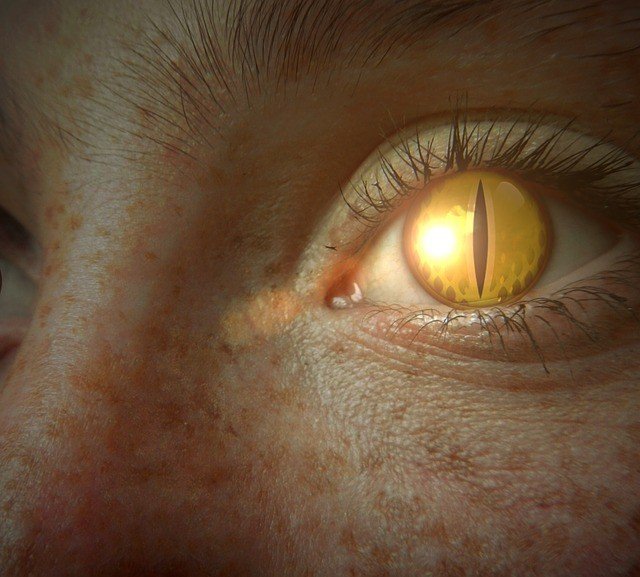 What do the experts have to say about the psychopath’s eyes?

Some have compared the psychopath’s gaze to an intense narrow-beam searchlight. When they lose interest and look away, it feels as if a light was suddenly switched off.

Many believe the psychopath is unconsciously projecting an “annihilatory stare,” meaning he or she isn’t seeing the other person as a human being, but coldly assessing them as an object he can use, manipulate or destroy.

The psychopath’s fixated, intense stare is sometimes referred to as scoptophilia: the sexualization of looking; predatory staring. It is visual predation. 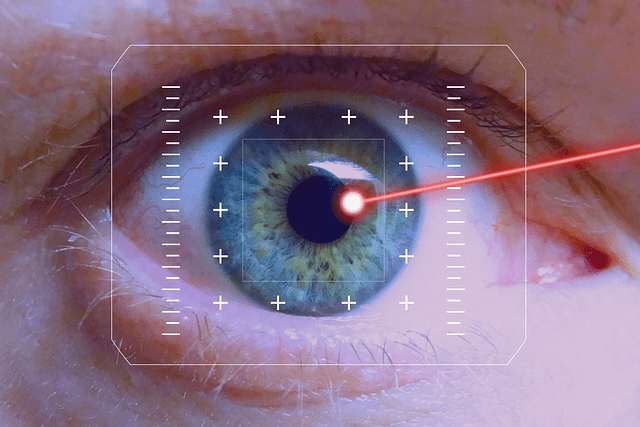 Experts also call it a “reptilian stare,” and that might be more than just a colorful description. Dr. Reid Meloy’s Reptilian State Theory hypothesizes that psychopaths are more like reptiles than mammals. The brain structure of the reptile supports the behaviors of establishment and defense of territory, hunting, feeding, mating, dominance, aggression, and imitation.  Psychopaths and reptiles are missing behaviors that are products of the emotion-generating limbic system, which is absent in reptiles and markedly underactive in psychopaths. 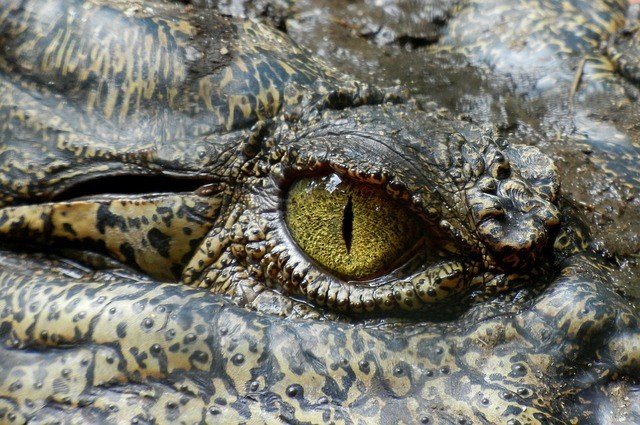 It is widely understood that psychopaths can’t attach to, or bond with, others.

“The ‘house of psychopath’ is constructed on a foundation of no attachment, underarousal, and minimal anxiety. These appear to be necessary, related, but insufficient characteristics that provide certain biological predispositions for the development of the psychopathic character. Attachment is a biologically-based, species-specific behavioral system which serves the survival of the infant by maintaining the closeness of the caretaker. It is deeply rooted in mammals, but absent in reptiles.” ~ A Psychoanalytic View of the Psychopath, J. Reid Meloy, Ph.D., San Diego Psychoanalytic Society and Institute

Now I understand where the book “Snakes in Suits: When Psychopaths Go To Work” really got its title. 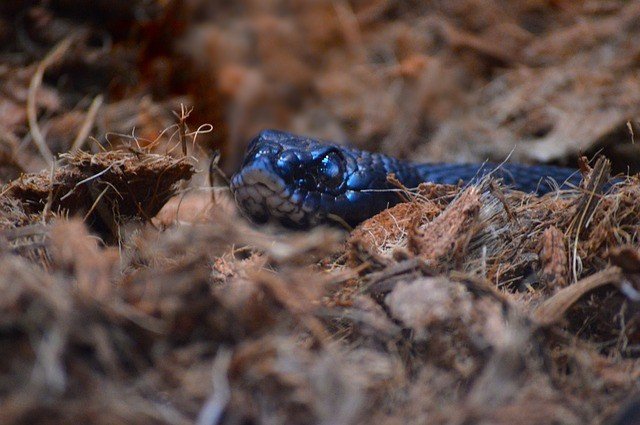 Dr Robert Hare says the intensity of the psychopath’s gaze is “similar to the concentration with which a predator stalks its prey.” They are totally focused and their rapt attention does not waver. In his book Without Conscience, Hare wrote, “Many people find it difficult to deal with intense, emotionless, or “predatory” stare of the psychopath. Normal people maintain close eye contact with others for a variety of reasons, but the fixated stare of the psychopath is more prelude to self-gratification and the exercise of power than simple interest or empathetic caring.”

In Without Conscience, a victim described the predatory stare: “I found it difficult to look at his eyes because they confused me. I didn’t know what was behind them and they didn’t tell me what he was thinking or what his intentions were.”

A psychopath’s strange, unsettling gazes are not constant – they can be momentary, lasting for a very short time. 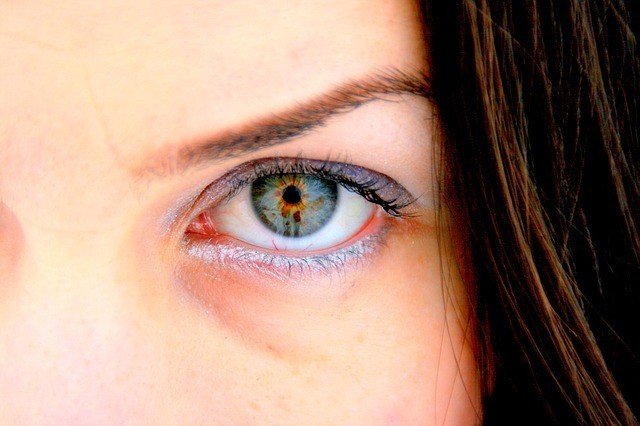 In my own experience, the psychopath I knew had lambent eyes — brilliantly playful, softly bright, luminous. They twinkled with warmth when he smiled, or so I thought. It was actually the twinkle of amusement as he manipulated me. A few times I saw the light go out in his eyes, and in those moments they became flat and dead. He had a transfixing, steady gaze and could lock my eyes onto his for long periods. It was as if there were a connection between our eyes that made it impossible to look away. I become completely absorbed in it and oblivious to the world around me. I mistook the psychopath’s predatory focus for the gaze of someone who was enamored with me. He smiled and said all the right things, but his gaze was actually the focus of a predator on his prey. Literally.

Nothing is foolproof. If you don’t see the signs in someone’s eyes, it doesn’t mean they’re not psychopathic. And depending on their particular gaze, there may not seem to be anything amiss until after the fact. For example, while a gaze that comes across as “reptilian” would be disconcerting and arouse suspicion, a gaze that’s simply “intense” could easily be misread.

Don’t ignore the signs that you might be looking into a psychopath’s eyes. If you do, remember this:

“When one gazes upon the psychopath, there is less there than meets the eye.” 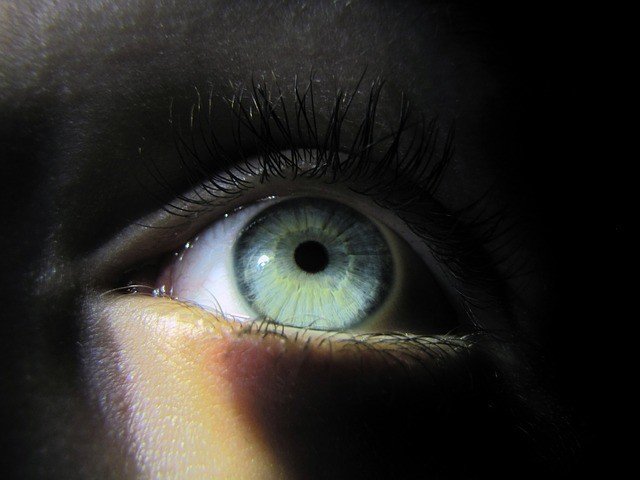 Linear interaction
Of two.
Lambent one,
One dim.
Interfusion
In a catalytic act:
Luminance. 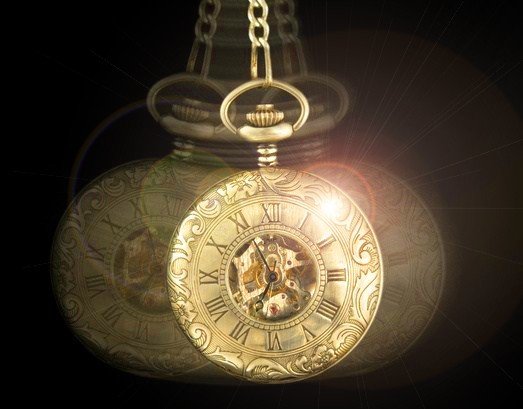